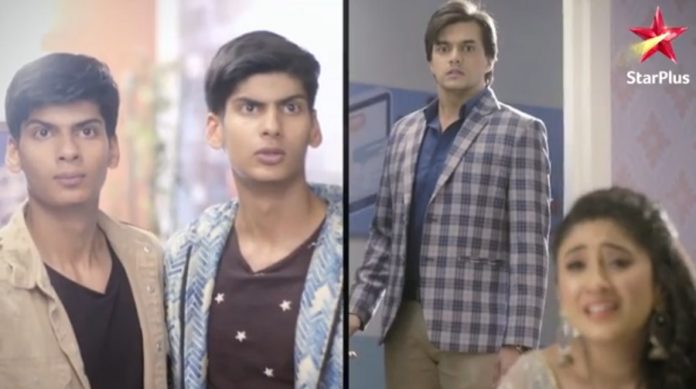 Yeh Rishta Kya Kehlata Hai on Star Plus has always been lauded to subtly touch the social issues while revolving the storyline around its characters.

The show has touched the the sensitive chord a numerous times and considering how the show is being watched by millions across the nation, it’s the best way to get the message to the audience.

The recent promo of the show depicts another crucial track coming up ahead. Since Luv and Kush has returned, things are already very puzzling with their recent nature and doings, for Kartik and Naira.

It depicts Naira very fondly talking about Trisha and how she has promised Negi uncle to take care of her. And suddenly the camera pans to the scene with a frantically running Trisha, all in a mess and Luv Kush behind her with one more of their friend. And while they are seen asking her whether she’d apologize or not, the trio are seen removing her dupatta with the screen blacking out with her denial.

A very disturbing visual follows afterwards with Naira at Trisha’s bedside, crying and telling Kartik what she would say to Trisha’s guardian and how she lost and couldn’t fulfill her promise.

The whole promo will give the viewers goosebumps at the sight and thought of what’s probably coming ahead. The real story will however unfold later on but the way makers have dared to touch a subject of harassment and adolescent influence is commendable.

Also how the makers mold the entire track and culminate into something meaningful, will be worth watching.

As of now, as per the promo, the ball will be in Kartik’s court. Luv Kush’s faith lies on their bhaiya to save them from the allegation whereas viewers and Naira will expect Kartik to stick with the truth and the right. Kartik has always been a very righteous character. He didn’t try to hide it when his uncle aka Luv Kush’s father was cheating on their mother. Will he hide Luv Kush’s deeds? Well, with closed eyes we can say no. However, when you love someone with all your heart, have seen them growing, have been a parent to them and loved them like your own kid, the decision to punish them severely becomes very hard and painful. But probably, Kartik and Naira will take that pain to teach Luv Kush a lesson.

The upcoming track has the potential to give out a strong message to the viewers. It can evoke discussions that we generally avoid. Crime against women is not uncommon and when it’s your own family involved in the crime, taking the right tough call isn’t everyone’s forte.

Check out the latest promo below –

Luv and Kush have crossed all lines….How will Kaira deal with this shocking truth and what do you think their next step should be? #YehRishtaKyaKehlataHai, Mon-Fri at 9:30pm on StarPlus and Hotstar: http://bit.ly/YRKKHHotstar @shivangijoshi18 @khan_mohsinkhan