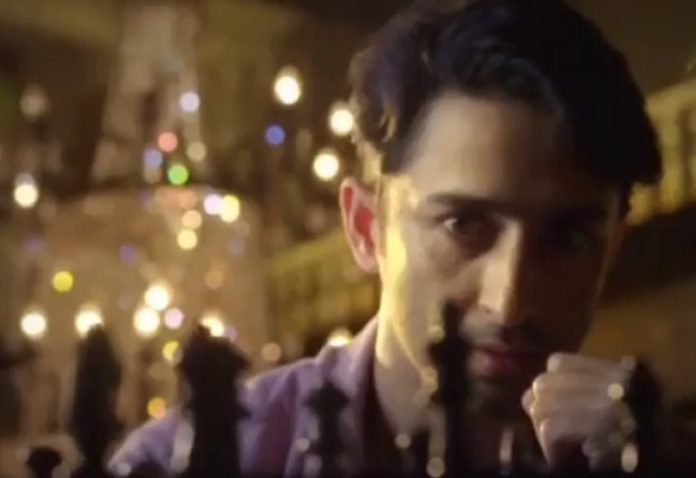 Abir sitting in front of the chess board, which is quite unusual but then chess board or ludo, we wouldn’t mind. After all the viewers are getting to see this handsome face after three freaking months!

Anyway, while we were trying to focus on the serious expressions on his face contrary to the million dollar smile, the slow new version of ‘Dheere Dheere’ that began ringing in the backdrop caught our attention. But just before our smile could reach ear to ear, we had our ‘Abir’, speaking heavy words like ‘chaal’ and ‘baazi’ (who would have imagined his romantic shayaris taking a turn like that too!)

And just as he speaks the words ‘Ek taraf meri behen hai ek taraf mera pyar hai’, the camera pans to Ketki who’s getting ready and is smiling whole heartedly and Mishti, who appears to be crying and scared as she emerges on screen.

The further visuals of a fear stricken Mishti with her blood soaked hands and Abir’s determined face as he walks away rolling over the chess board will leave you shocked and how. As he walks away, he promises to be the shield for his family as always.

While it’s still taking us time to absorb the sudden and unexpected change in the storyline of Shaheer Sheikh and Rhea Sharma’s Yeh Rishtey Hain Pyaar Ke, this latest promo has grabbed our attention like no other.

The way this promo has unloaded the hints for the upcoming track, it has heightened the suspense and interest amazingly.

While everything seems to be taking a turn already as we heard with the new entrant Ruslan Mumtaz in the show,
one thing that remains constant is Abir’s avatar when it comes to his family and loved ones.

Infact on a lighter note, watching Shaheer Sheikh in that intense Abir soul and with those dialogues coming from him, it looks like the makers are giving good time to the viewers to gradually get over Arjun from Mahabharat and get used to watching their Abir again ( if you know what I mean!)

This latest promo clearly suggests something big coming up for sure and after today’s promo, we’re pretty sure there’s some new trend coming up soon. For the excitement is too high to be contained.

What are you waiting for? Scroll down below if you haven’t seen the promo already!