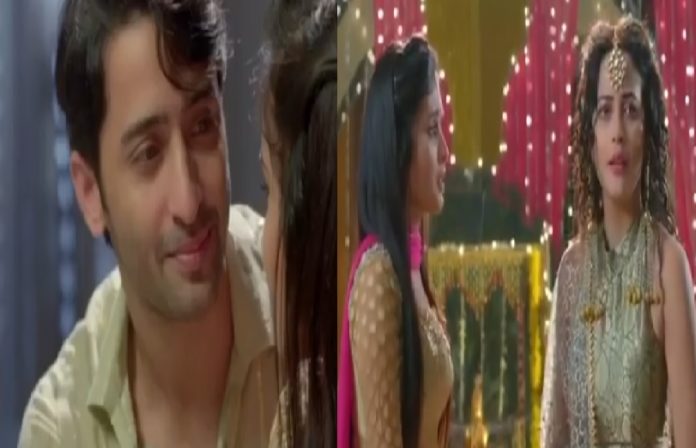 The fans of the show Yeh Rishtey Hain Pyaar Ke are super elated with the episodes lately since it’s rare to have back to back fully jam packed episodes with each element of entertainment in it.

The current track on the show just ended with the infamous murder mystery getting solved and Mishbir aka Mishti and Abir returning back home to some happy family moments together.

The latest promo of the upcoming track is what has caught the viewers’ attention now.

The promo showcases Abir (Shaheer Sheikh) and Mishti (Rhea Sharma) fondly rocking Kanha Ji’s swing while Abir expresses his wish to have a little Kanha in their life too. The scene cuts to Mishti requesting Kuhu (Kaveri Priyam) with a heavy heart to be ‘Devaki’ to her child while Kuhu doesn’t look very pleased with the idea and questions Mishti in a negative way in turn.

What makes this promo worth getting excited? – As the audiences already know now after tonight’s episode what the future track holds for Mishbir.

Abir wishes to have a kid and pretty soon we might witness some cute moments amidst Mishbir too.

While this hints at upcoming pregnancy track, a particular scene of Mishti and Varun’s encounter is enough to let the viewer’s know that Mishti was hit badly in stomach and this twist in the tale is definitely going to be a barrier in this track.

The surrogacy track that lies ahead with the promo might sound a bit uncomfortable to many special pertaining to Kuhu and Mishti’s equation in the show but looking at the positive aspect, it’s great to see the makers making an effort to take up another sensitive and debatable issue for the society in fact.

If handled with care, the track can actually explore the aspects of it making the viewers aware of the issue and maybe sending some right message across at the end.

Although it would be a great idea to see adoption coming into picture considering how Mishbir have always found their parents not in their biological ones but the ones who took them in or were their pillars in true sense. For Abir it was his Naanu and Parul Masi that were like true parents to him and for Mishti, Badi Maa and Bade Papa being her miracles isn’t an unknown fact.

Watching the two changing someone else’s life in the same way would actually be a nice move too.

Also there are a lot of challenges that the makers will have to deal with if gone ahead with the track. The idea of Kuhu being the surrogate mother might be objectionable on many grounds. Also considering the legal and practical aspect of the same, neither Mishbir nor Kuhu fit in the credentials mandatory to go ahead with surrogacy in our country.

But here’s hoping the makers will do complete justice to what they are bringing on platter for the viewers to watch. For now, it would be fair to give a chance to the team of the show to come up with what they have to offer through this upcoming track and then form an opinion, for the promos are never a complete picture!

After all this is just the trailer, picture abhi baki hai mere dost!

Watch the latest promo below –

A post shared by Directors Kut Production (@directorskutproduction) on Aug 17, 2020 at 9:08am PDT