Home ENTERTAINMENT CELEBRITIES Zain Imam : Have You Seen The Teaser Of His Music Video...

Zain Imam is a talented actor and a fine performer. The actor has left a mark and made a distinct impact each time he has graced the television screens.

Be it as Abhimanyu in MTV’s Kaisi Yeh Yaariaan, or as Yuvraj Luthra in Zee TV’s Tashan-e-Ishq, or Abeer Dharmadikari in Zee TV’s Yeh Vaada Raha, or as Neil Khanna in Star Plus’ Naamkarann, or as Mohit in Star Plus’ Ishqbaaaz, or as Kabir Mittal in Star Plus’ Ek Bhram Sarvagun Sampanna, the actor has only impressed in every character he has portrayed onscreen.

The actor debuted on Indian television way back in 2014 and since then there has been no looking back for the star.

Recently on 18th May Zain Imam celebrated his birthday. And as treat to his fans the actor shared a short teaser of his upcoming music video Yaariyan on his Instagram account.

The music video One Music Originals stars your favorite Zain Imam and Mamta Sharma. Sung by Mamta Sharma, Zain Imam is once again coming to make one and all fall in love with him.

The short teaser shows the silhouette of Zain Imam walking ahead.

Just a small teaser that is out, but it is enough to get the ball of excitement rolling amidst the umpteen number of Zain Imam admirers.

Also Read : Zain To Make A Comeback With A Web Series And Here are The Details For You

The music in the teaser sounds soothing and soulful.

Indeed this must be exciting for all the actor’s fans out there and left them over the moon.

Also Read : Watch Zain’s Budding Culinary Skills As He Shares A Recipe With His Fans

So what are you waiting for? Watch the upcoming music video’s short teaser below now.

Coming to drown you in love, the song will be out in May.

Are you excited to watch the your beloved actor in a music video? Do let us know in the comment box below. 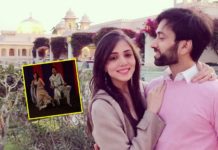